Russia will be joined by several countries with their future invasion of Israel (Ezekiel 38-39). Chief among those countries is Persia. This is modern day Iran. The country was known as Persia until the name change in the 20th century. 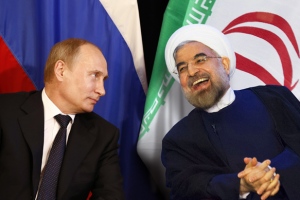 The empire Persia; encompassed the territory from India on the east to Egypt and Thrace on the west, and included, besides portions of Europe and Africa, the whole of western Asia between the Black Sea, the Caucasus, the Caspian and the Jaxartes on the north, the Arabian desert, the Persian Gulf and the Indian Ocean on the south.

Persia proper was bounded on the west by Susiana or Elam, on the north by Media, on the south by the Persian Gulf and on the east by Carmania.

August 2017: This story is now being reported by multiple news agencies in Israel. A “Secret Research Facility” is being built in northern Syria near the Mediterranean Sea. Iran is believed to be building a missile factory in Syria. Israeli satellite intelligence has detected a building consistent with a long range missile factory.

August 15, 2017: For the first time since the 1979 Islamic Revolution in Iran, a government official visited Turkey. This is a significant development. Iran is of the Shia brand of Islam. Turkey is of the Sunni brand of Islam. The two countries have historically been adversaries.

General Mohammad Bagheri is the head of Iran’s Revolutionary Guard. He visited with military and political officials of Turkey. The focus of the meeting was Syria and the Kurds. The Kurd issue was considered to be “counter terrorism”.

Afterwords, General Bagheri had a meeting with Turkey’s Defense Minister Nurettin Canikli. This was followed by a private session with Turkey’s President Recep Erdogan.

This ancient Ezekiel 38-39 prophecy from 2,500 years ago appears to be trending into shape.