Jeremiah 49:23 Concerning Damascus. “Hamath and Arpad are put to shame…

Roughly 2,600 years ago the prophet Jeremiah wrote about the eventual destruction of Damascus in Jeremiah 49. See also Isaiah 17. In the northern part of Syria is Aleppo. Ancient Arpad is located approximately 10 miles north of modern day Aleppo. Moving south in Syria, the next location is ancient Hamath or modern day Hama. Hamath was the capital of the northern kingdom of ancient Syria.

Russia has introduced its most advanced fighter jet (the MiG 29SMT) into the conflict. The MiG 29SMT is stationed near Latakia, Syria. For detail and specifics of the jet’s capabilities, see the link below. 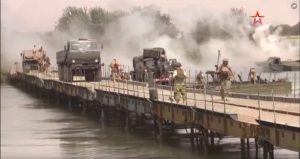 Otherwise, the Euphrates River is operating as a point of division between the Shia forces of the Syrian government and the predominantly Sunni forces of the Kurds.

The battle for Raqqa continues. Devastation in the city is profound. Sources on the ground indicate the United States backed Kurds (SDF) now control 80-90% of the area. Roughly 700-1,000 ISIS fighters remain in the city. Military commanders estimate the liberation of Raqqa should take place within the next month. Kurds now control the grain silos for the city. Medicine, food, and water remain in short supply.

And this is a developing story. Kurds are voting for their independence. Early polling numbers show the Kurds are overwhelmingly in favor of their own country. Preliminary results indicate 93% in favor of the nation Kurdistan.

Neighbors around the Middle East are less then enthused. President Recep Erdogan of Turkey is threatening military action and to cut off food supplies to the future country. Erdogan has indicated he will cut oil and gas lines coming from the region. Turkey also looks to control the water of the Tigris River with the construction of the Ilisu Dam. And for good measure, military hardware and troops are headed to the Turkey/Iraqi border.

Iraq and Iran are not supportive of a national Kurdistan. The following is from Radio Free Europe.

September 25, 2017: “We are not ready to discuss or have a dialogue about the results of the referendum because it is unconstitutional,” Iraqi Prime Minister Haidar al-Abadi.

September 27, 2017: Tehran, Iran… The Iranian parliament announced it would hold a closed-door meeting on the referendum on the Kurdish issue.