Isaiah 17:9 In that day their strong cities will be like the deserted places of the wooded heights and the hilltops, which they deserted because of the children of Israel, and there will be desolation.

See video link below for geography and additional analysis.

April 9, 2018: Russia is upset with Israel over a missile strike in the heart of Syria. Previously, Russia has been silent with previous Israeli intervention in Syria. Reports out of Syria indicate 14 were killed in the strike including Iranians. 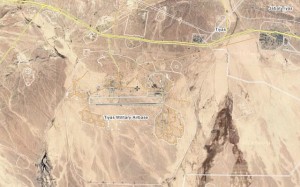 Many think the missiles were a response to a Syrian poison gas attack held in east Damascus over the weekend. At least 40 people were killed.

“This is a very dangerous development. I hope at least that the US military and those of the countries participating in the coalition led by the United States understand that,” Russian Foreign Minister Sergey Lavrov.

On a curious note, some local sources are indicating Russian staff was tipped to the attack. See the tweet below from a journalist.

Not a surprising line from the Kremlin. Guess it’s just coincidental Russian personnel left T4 just before the strikes. https://twitter.com/olliecarroll/status/983302342291402752 …

The United States has maintained innocence. France says they did not do anything.

Israel has not commented on the incident. But the following statements were made.

“In Syria many forces, from various bodies and coalitions, are operating. Each one says what it says and denies what it denies. We have clear interests in Syria and we set red lines. We will not allow weapons to pass from Syria to Lebanon, and we will not allow the establishment of an Iranian base.” Construction Minister Yoav Galant, Israeli Security Cabinet. He is a former IDF Major General.

“There’s no need to run and tell your friends or to take responsibility. Whoever needs to understand will understand,” Former Defense Minister Moshe Ya’alon.

Ezekiel 38:2 “Son of man, set your face toward Gog of the land of Magog, the prince of Rosh, Meshech and Tubal, and prophesy against him…”

For details linking ancient Magog to modern day Russia, see the link below.

April 9, 2018: Russia has expressed concern over Israel’s tactics near the Gaza Strip. Russia calls the military application an “indiscriminate use of force against the civilian population.”

Russia is now starting to bark about Israeli military intervention.