Psalm 90:10 The years of our life are seventy, or even by reason of strength eighty; yet their span is but toil and trouble; they are soon gone, and we fly away.

The nation of Israel will turn 70 years old on their birthday, May 14, 2018. The Jewish nation was replanted on May 14, 1948. The verse above details the life of Israel since it was reborn. Their time as a country has been nothing but toil and trouble. Their time can also be translated as labor, sorrow, and wickedness. Israel is surrounded by people who want to destroy her and push her into the Mediterranean Sea. Today at 70, Israel has never been stronger. And she is gaining economic and military strength.

Big news making events are scheduled around the week of Israel’s birthday. Here is a list of what’s on tap.

Trey Smith will be on location in Israel during these historic events and prophetic times. Stay tuned to https://godinanutshell.com/

May 12, 2018: President Donald Trump will decide the fate and direction of the Iran Nuclear Deal. The Iranians entered the agreement with six countries (United States, Russia, China, the UK, France and Germany) to monitor their nuclear program and aspirations. For specific details of the program, see the link below.

May 14, 2018: Israel will celebrate their 70th year as a country. Festivities for the event started on April 18. 2018. See the link below for a list of the celebratory events that kicked off the Independence Day.

May 14, 2018: The United States will move its embassy from Tel Aviv to Jerusalem. The event recognizes Jerusalem as the capital of Israel to the world. The move has caused an international uproar. President Trump looks to deliver on a campaign promise for this historic day. Israel appreciated the gesture so much, the Sanhedrin has minted a half shekel Temple coin with his likeness on the coin.

Ron Dermer is the Israeli Ambassador to the United States. 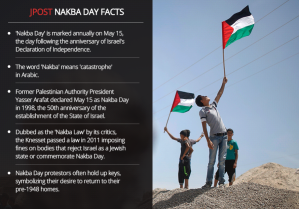 May 15, 2018: Nakba Day. The Palestinians refer to Israeli Independence as Nakba Day. Nakba is the Arabic word for “catastrophe”. They acknowledge Nakba Day the day after Israel’s declaration on May 15. Nakba day was initiated on Israel’s 50th Independence Day by Yasser Arafat.

Palestinians traditionally recognize the day with rocks and slingshots, Molotov cocktails, burning tires, IED’s, and violent protests. There may be special plans for this year’s events in light of the significance of Israel’s 70th anniversary and other surrounding events.

May 16, 2018: Since the decision was made, other countries are following suit. Other countries have pledged to move their embassies to Jerusalem. Guatemala has taken the lead and already completed the transition. Guatemala will open their Jerusalem embassy on this date.

Sunset May 19, 2018: God’s appointed Feast of Weeks or Shavuot is scheduled to begin. Christians refer to this day as Pentecost. Shavuot is one of the three holidays where Jewish men are required to come to Jerusalem (Exodus 23:14-17). The men were to make their presentation and sacrifice before God at the Temple.

As stated in the Leviticus passage, it is seven weeks after Passover. It is a celebration of the completed grain harvest. The holiday is also a celebration of God giving the Torah (instruction or law) to nation Israel. Because of this, Shavuot is considered as the beginning or birth of Judaism.

Despite the deadly intentions of their neighbors, settle in. Israel is not going anywhere. The Jewish nation is here to stay.

Amos 9:15 I will plant them on their land, and they shall never again be uprooted out of the land that I have given them,” says the LORD your God.

Happy Independence Day to Israel on its 70th birthday.