Matthew 24:15 “So when you see the abomination of desolation spoken of by the prophet Daniel, standing in the holy place (let the reader understand) …” -Jesus

November 2018: An election for the mayor of Jerusalem is to be held this upcoming week. A mayor’s term is for five years.

For additional analysis, see the link below.

The Sanhedrin of Israel is back in the news. The Sanhedrin reconvened in 2005 after a 1,600-year absence. Who is/was the Sanhedrin? They are/were a group of 71 members of Israel’s best rabbinical sages. The group was made up of members from the Pharisees and Sadducees back in the day. The Sanhedrin is/was lead by the High Priest. (Holman Bible Dictionary). Today, they oversee legal matters and future construction of the pending third temple. 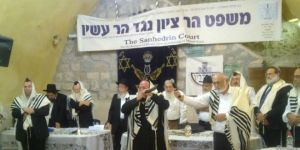 The Sanhedrin has issued a letter to both candidates. The focus of the letter is the building of the third Temple. Here are some Sanhedrin quotes from the letter.

“With God’s merciful approval, one of you will be chosen as head of the city, may it be built and made ready for its ultimate purpose. We call on the candidates as well as the voters to make choices based on truth and on the main aspect of Jerusalem, which is the building of the Temple.”

“Avoiding this essential issue endangers the existence of the city and its identity as the capital of Israel, thereby endangering Israel itself. Every Jew and all of humanity are commanded to ascend to the Temple Mount.”

“We expect you, as candidates, to relate to this role the city has as home of the Temple. This subject is not simply a matter of religious belief but must also be expressed in political, fiscal, and educational terms.”

“Jerusalem in its entirety is sanctified as Holy and is the spiritual center of the world, the throne of God. We urge you to make public your plans relating to this aspect of the city. There are several ways this can be accomplished, such as festivals of holiness to replace those of impurity.”

“Jerusalem must prepare to host the millions of pilgrims who will attend the feasts when the Third Temple is built. We also call on the government to prepare a center for an international body to replace the United Nations and the Hague, one that will be rooted in the Bible.”

For more details regarding the candidates, click on the link below.

The infrastructure build in Jerusalem and across Israel has begun. The message is clear. Get ready for the Temple.